Figuring out the best way to attach stirrup leathers to a saddle is one of the biggest challenges when you're trying to teach yourself how to make miniature tack. I briefly touched on this when I wrote about developing my new tree-making technique. Now that I have been using that technique for a while I am still very pleased with this technique as I think it gives the most realistic and accurate effect. My stirrup leathers and the way they attach to the saddle is just like real life, in that you can pull the top of the leather down to adjust using a buckle, and the stirrup leather can be slipped off the back of the stirrup bar in an 'emergency'. But they are still very secure. Recessed bars mean that there is less bulk under the riders leg, and I have found that this was the hardest thing to get right. 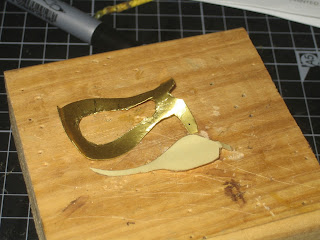 I start by marking up the tree with permanent marker. The black dot in the photo above represents the level that my bar will sit. I use the pattern for the skirt to make sure that the bar will sit about half way down the skirt, so there will be enough skirt leather to cover the bar and stirrup buckle, but it isn't so high up that you can't access it. 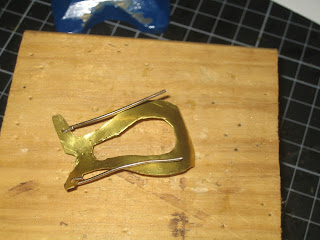 I use a dremel with a 3/64" diameter drill bit to drill the holes. This is the right size for my silver wire which is 1mm diameter. I use silver coated wire as it is strong yet malleable. I thread about 3-4mm through and then crimp the wire using pliers. I then use my mini anvil and my jewellers hammer to gently hammer the wire until it squashed flat and almost flush with the brass tree, as seen below. 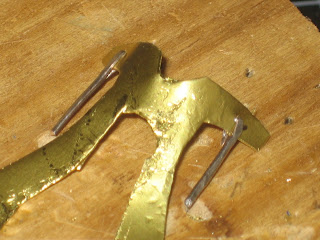 By doing this, the wire is effectively locked into position. I also flatten the wire along the length of the bar a little, again to cut down any bulk. Then the bars get trimmed a little, not to their final length as I will do a final trim when the skirt gets put on. I want to make sure it's long enough so that the stirrup leather is unlikely to slip of during normal use, but not so long that you can't get the leather onto the end of it. 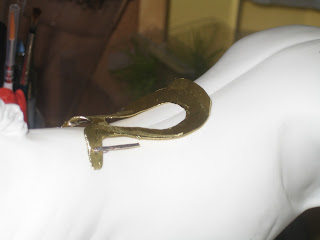 The next instalment will look at the next stages and how the bars look when the flaps and skirts are introduced.

Posted by Four Corners Tack at 5:47 AM No comments:

I think I have turned a corner this weekend. We had some bad news about a close family member recently which has caused some stress and anxiety. We have been debating when to go back to the UK to visit and trying to juggle timings with work etc. These things always serve to make us reassess life and realise what is important to us. Work has been pretty stressful over the last 6 months or so. Sometimes it just takes a little jolt to make us realise work is not the most important thing in life. We must also make time to do the things we love and spend time with the people we love. I've been pretty good at spending time with Andy, my partner, he does not appear to be neglected! But actually making time for doing the things I love has taken a real back seat. I have been focussing more on the things I think I should be doing, like cleaning, cooking, going to the gym etc.

So, I managed to finish an order for some Equorum tack yesterday. No photos quite yet as I haven't got the stirrups yet. Then I started in earnest on Rayvin's cross country set. I've made good progress on the tree, and documented that process which will form another blog post soon. I have also decided to start a journal documenting all the tack I make. So far my documentation has been pretty bad. The occasional photo and just a few quick notes in my order book. I'll talk about this a bit more in my next blog post.

I've had a few ponies arrived recently who deserve a mention on here. This is not all of the horses that ave arrived over the last few months, just the ones that were out and asking to be photographed! 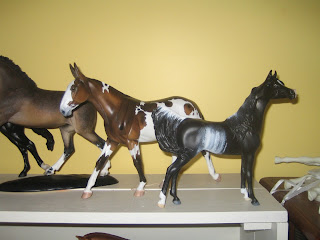 First off is this Calliope resin and PF Hez Jazi resin Arab colt both painted by Alice Jez. These guys have been owed to me for a long time but due to my various worldwide moves, name changes and lost emails it has taken 5 years for us to be united! I wasn't a massive Arab fan 5 years ago and I'm really not one now. So he'll be up for sale, let me know if you're interested! 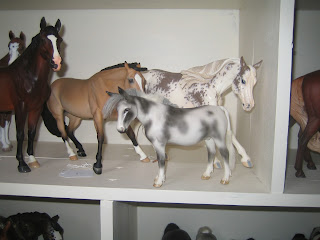 There are a few newbies in this shot who I haven't introduced yet. Starting at the front we have an adorable Equorum Donkey who doesn't have a name yet (any ideas??). His mane is the softest thing imaginable and he has such a lovely expression. Behind him to the right is my Rose Reiner named Cloudbreak painted by Sandra Hottinger. His paintwork is just breathtaking and looks awesome tacked up. Next to him is Hunnypenny, an Oktopussy resin painted by Tiffany Purdy. She is totally awesome too and replaces my First Impression resin who I sold over east. The two guys on the left are both Eberl Warmbloods, a Roy resin called Rudyard at the front painted by Heather Bullach, and a Wico resin named Copernicus at the very back painted by Sherry Clayton. Standing models like these aren't the most versatile in terms of performance but I just love these sculptures, they represent the type of horse I would love to own in the real world! 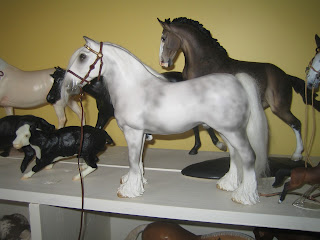 Back to latex, and this is the new Equorum Shire Horse mould. He is wearing a bridle by Corinne Ensor which I had for quite a while. He doesn't have a name yet either. Love his feathers! 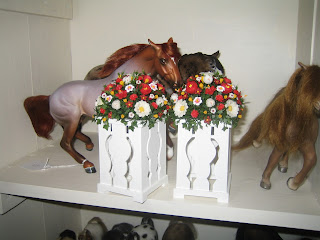 This is not really showing a new horse (except the champagne Equorum Icelandic on the right), but some new dressage planters made by Kim Haymond (Table Top Studios). They are modelled on the Olympic arena planters but in a red theme rather than purple. I am really impressed by the quality and can recommend Kim's work all day long.