Oh dear, well one of my new years resolutions from the beginning of 2012 didn't really stick. My intention was to try and post on here a bit more, but I've actually written fewer posts than in 2011!

I'll try again for 2013 but I'm not promising anything this time! Over the last 12 months I've probably made fewer tack sets than ever. As far as full sets go, I've made one huntseat set, one classic scale show set, one western set, one Australian set, a pebbles scale western set and then a couple of bridles and other small accessories. So, pretty varied really, but only 5 sets over 12 months. I couldn't do anything for January or February as we were still waiting for our container to arrive, so maybe my annual rate is closer to about 6 sets, or 2 months per set. This is useful to know, and it's the kind of time frame I should bear in mind when planning next years workload.

Right now I have three things on the books: a bridle, a Draught horse presentation set, and a full cross-country set. More variety - I like it. I also have a few updates on the website to do and facebook as well. The Yahoo group is really taking a backseat. Updating four different things seems pretty inefficient so I will be discontinuing that group shortly. Blogger works far better for announcements, and facebook works well for random snippets and in-progress photos.

I have really been lacking any sort of motivation since the Ultimate Gold 2 live show on the 9th (yes I should do a blog post about that...). I had 5 days off over Christmas and yet didn't lift a finger in the studio. It was nice and clean, fairly inviting, but I just didn't fancy making anything. Lots my mojo a little, but it doesn't help the temperatures have been at least 36C each day. Big heat is a recipe for disaster when it comes to Lauren's motivation. So I didn't push it. I laid on the sofa watching cooking shows and property shows, and looking after my friend's dog Ted who is a pretty cool Cocker Spaniel. He's the only dog I've ever met who likes swimming in figure of 8's at the dog pool. I've also been going and feeding my friend Linda's 4 cats, two of which are stray kittens she has taken in and cared for. They are timid little things but after a week of going round I am at the stage of being able to pet them both. It's so nice being around animals again, they have such a soothing influence. Hopefully it won't be too long before we have our own best friend in the house.

I'll sign off for 2012 by wishing everyone a fantastic New Year! Here's a random picture of a polo pony playing at Polo on the Beach, Cornwall 2011. Leave me a comment if you'd like to see more pics from this event! 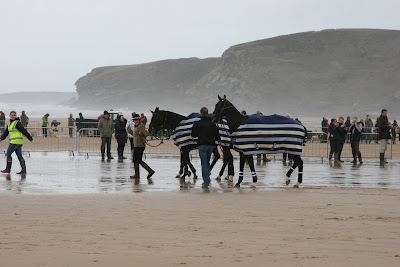 Le Trec with a Standing model

For my upcoming live show, I have been researching a little known equestrian sport that I think will e a good match for one of my standing models. I recently bought my Wico resin as an unpainted body and asked Sherry Clayton to paint him up for me. She did a great job and painted just the right amount of sabino markings. I'm not totally decided on a breed but he'll be something along the lines of Gelderlander, KWPN or Holstein, I think those three breeds allow sabino.

Anyway, he does look rather nice with some of the blue accessories I have. I made the bridle years ago for an Arab I have, but who has a broken ear right now. It's made of some kind of plasticy lace, which I remember being a real pain at the time but has held up well, none of the bonds have broken. I do have other colours of this stuff too so one day may explore other possibilities with it. The whole bluey theme would go well with some kind of endurance set up, but his pose isn't exactly very active. I suppose he could do a vetting scene but I would need more dolls for that. So I looked into Le Trec. Now this is a sport I would definitely do if I had my own horse! It consists of three main phases: orienteering on horseback (POR), control of paces (CoP), and the cross-country/obstacle course (PTV). The sport has French origins which explains the acronyms used for each phase! It was originally designed as a way to test equestrian guides in the horse tourism industry.

The POR can be up to 12km long at the lowest level, up to 40km at the highest level. Riders get a limited amount of time to trace the route onto their own map, and then ride the route starting with 240 points. Points are knocked off for missing checkpoints, getting the route wrong, etc. The CoP is carried out over a marked out section 150m, where they must demonstrate control of the various paces, for example cantering the course as slowly as possible whilst not breaking gait. The PTV phase is probably the most interesting from a model horse showing point of view. The course comprises 16 obstacles, each of which are judged, and these are a mix of what you may find on a cross-country course or a trail course. Typical obstacles include crossing a bridge, small jumps, opening/closing a gate, going up and down staircases etc. The one that caught my eye, with Wico in mind, was the immobility obstacle. Trec Ireland has great data sheets on each obstacle, particularly useful for those of use who like lots of good documentation.

The immbility obstacle requires the rider to walk into the centre of a 2.5m diameter circle. The rider then has 10 seconds to position the horse and release the reins completely, laying them on the horses neck. Once the reins are released the timer is started and is stopped when either the rider moves to pick up the reins or when the horse leaves the circle. Full marks are awarded if the timer reaches 10 seconds. Deductions occur for interventions, brutality or dangerous methods!

So, my Wico looks pleasantly relaxed and at ease, and will look great inside that circle.
This weekend I made up a base which is pretty simple, and will use small cones to demarcate the circle, using a plate as a template. The flags are secured in small holes in the base. 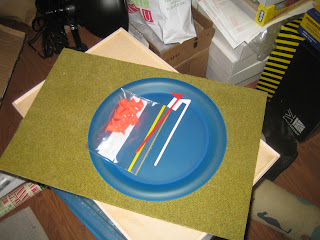 There is also a dismounted immobility obstacle, where the horse is led into a 4m circle and left there whilst the riders leaves the circle and stays outside another 8m circle. The rules are basically the same but I chose the mounted version as it takes up less space, and I don't have to deal with trying to get a doll to stand up!

Overall I'm pretty happy with the idea of it all. We'll see how it goes down at the weekend!

Posted by Four Corners Tack at 10:00 PM No comments: