This is a bit of sneaky post before I get to the live show reports. Equorum models in the UK have just listed a lovely set for sale, including a customised Arab model complete with black leather side-saddle and double bridle made by yours truly. They are about 1:10 scale approximately and all the leather is hand cut. The tack is part of my Equorum range of tack which can also be ordered separately through the Equorum website. 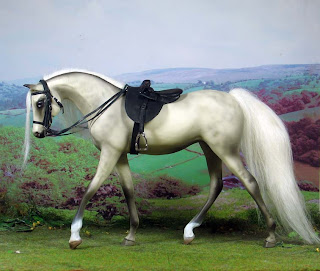 Posted by Four Corners Tack at 1:14 AM No comments:

Coming up for air!

I have been really busy over the last few weeks. Last weekend I attended my first Live Show in Australia, the Ultimate Gold live show hosted by Stacey Crowley. So I will be writing a couple of posts dedicated to that. But before the show I managed to finish a couple of orders, including two sets of boots for Stacy Quick and Stacey's Morgan bridle.

Stacy's first set was exactly the same as some I had made previously for her. They were for her CM Newsworthy model to match her show jumping set. The second set were a set of four protective boots for a steeplechasing set up she is working on. To save her having to fiddle around with buckles or studs I experimented with magnets for these. The results can be seen below on my Atom resin. They feature stitched on striking pads as I've never had much belief in glue when it comes to striking pads. At least by hand stitching I know they're NOT going to come off! Overall I was pretty happy with the design of these boots and they'll suit cross-country too. I made a set in black leather as my donation to the Ultimate Gold live show and peeps there seemed pretty interested in the magnetic closures. They take seconds to take on and off and the straps have much less chance of breaking or tearing. 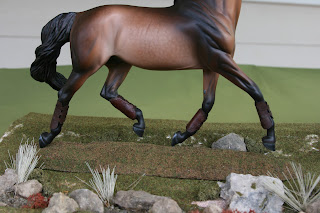 Next up was Stacey's bridle for her Darcy resins. I had sworn I had ordered the bit for the bridle months ago but couldn't find it anywhere, so quickly ordered a new one. Luckily it arrived the day before I left for the show so I was able to finish it off. It features a fancy blue browband and noseband with rolled black leather edging. 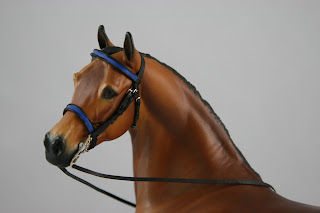 Finally I am starting to feel like I'm getting on top of my orders. I still have some that are long overdue like the Australian set, as well as concurrent Equorum tack orders, but the light is just peeking through at the end of the tunnel. My books will be closed until these orders are finished and will probably stay closed for a few more months as my stress load at working will be increasing!

In the next few posts I'll have some fun live show pics and results, everyone needs a break from tack once in a while!
Posted by Four Corners Tack at 2:27 PM 3 comments: