It really shouldn't have taken me this long to finish these off, but then it always happens this way so I should learn to expect it!

I'm pretty tired after playing two hockey matches this weekend (though I do actually doubt my ability to get off the sofa and go up the stairs!), so this post won't be too long. I also managed to take some photos of the sets which will also go on the website. The only thing to tell the two sets apart is that mine has a red noseband and a slightly longer girth, otherwise they're the same.

The other set will be flying down to Alex in Australia in the next few days. My lovely Darcy resin painted by Jennifer Scott is modelling the sets, such a nice sculpture! This particular one I was lucky to win at the NAN auction in 2009.

So that's the end of the saddleseat set posts for a while, I'll soon be starting a couple of pony sets. 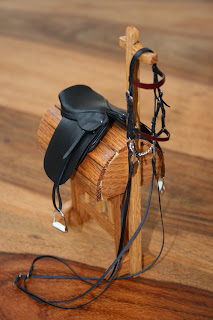 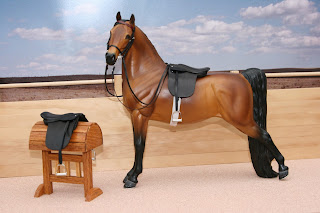 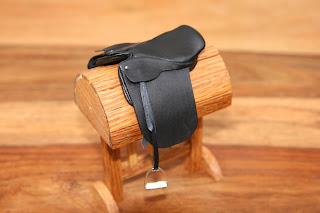 Posted by Four Corners Tack at 10:26 PM No comments:

For the saddleseat sets I have been working on recently I wanted the stirrups to have the proper white pads. I could have got them ready done in the form of Sulser Saddlery stirrup irons, but I feel they are a little small for true trad scale. I prefer the RDLC english irons available from The World of Model Horse Collecting on Ebay. They aren't available with white treads so I've had to come up with a way of making my own. 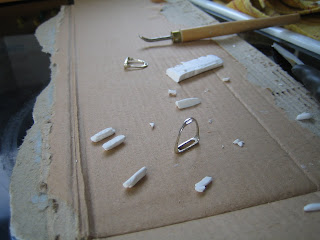 I used white fimo from which I cut a narrow slab. Into this I pressed the bottom of the stirrup about halfway through the fimo. With a knife I was able to trim all the way around the stirrup and also any excess that poked through the top of the stirrup base. I then prodded the fimo piece gently from the top until it fell out, and then straightened it out a little. Into the oven they went, and with a small amount of trimming with a knife they can then be inserted into the stirrup. I added some glue for extra security.
An alternative would have been to buy the cast metal treads and paint them white, but for me I always get fed up painting metal items and find this method quicker.
Posted by Four Corners Tack at 5:30 PM 1 comment: