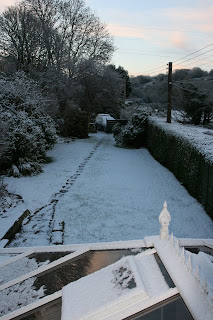 I can't believe it has snowed here! We normally don't get snow this far into Cornwall, but an inch fell yesterday morning and it's still here today. I have a pretty bad cold this week so it was a good excuse to stay in and get the saddles finished. 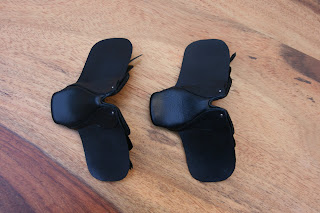 One of these is for an order and will be heading down under when I finish the set. The other I'm keeping for myself, for my lovely Darcy resin and my Miss America resin when she arrives. As the saddles are built on the flexible brass trees, they can be gently adjusted to get a good fit on a wider range of models. If there's one thing I hate, it's a poorly fitting saddle. In the interests of realism a model saddle should fit just as well as a real one should. 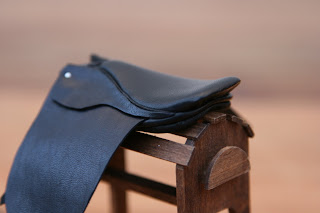 I am very pleased with how the saddles have turned out, particularly the shape of the seat and the rear of the saddle. I could really imagine these saddle would be pretty comfy, as I've managed to ensure that the transition between the seat and the skirt is smooth and the welt is nice and narrow. I like the square cantle, but the tree could easily be modified to create a round cantle. 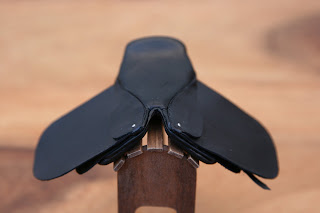 The pins aren't for decoration, they do actually keep the skirt and flap in place securely and actually go through the brass tree. 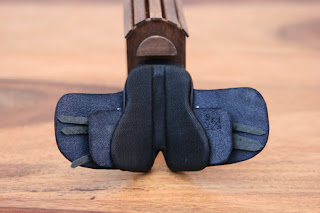 The panel is a 'half-panel' but still has a good broad surface area. In the above picture you can also see a tiny bit of white in between the flaps, that's the webbing that the girth billets are sewn onto. 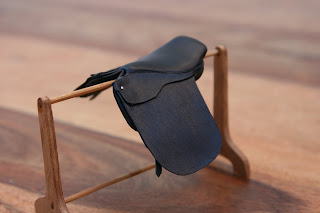 You may notice that there are no stirrup leather keepers on the flaps. That is intentional, I didn't forget! Most saddleseat saddles do not have them, instead the excess stirrup leather is either fairly short, or the excess is tucked down behind the saddle flap. 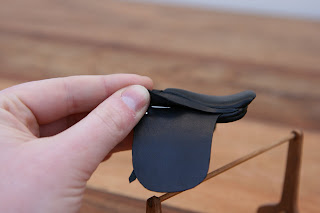 My stirrup bars turned out really nicely, just in the right place. Many real saddles have adjustable stirrup bars that can be adjusted further back, but I haven't quite got that far yet! You can also just see another pinhead by my thumb which also goes through the tree and keeps the flap securely in place.
Posted by Four Corners Tack at 3:32 PM 1 comment:

I took this picture at the weekend at a spot called Basset's Cove on the North Coast, about 4 miles from my house. You might notice the rock in the foreground has a grimacing face on it! It's so nice to be able to visit these places as and when I feel like it, and to have such stunning scenery on my doorstep. It's always very inspiring! 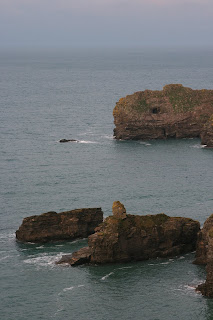 Back to the saddle trees. In my previous post I said I would be working on a new saddleseat tree design. The picture below shows the basic shape cut from sheet brass. The cut-back head is equivalent to a 4 inch cut-back in real life, it looks pretty long in model form so I hope it doesn't look too weird on the finished saddle. I chose a squarer cantle for this tree as I think it makes these type of saddles look really elegant. As you might be able to tell, cutting out the inside hole was quite hard work, but as this doesn't show on the finished saddle it doesn't matter if it's a little bit rough! 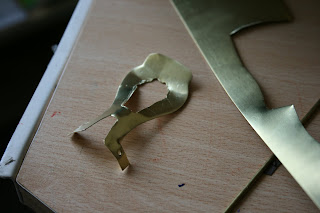 Once the tree has been shaped and the stirrup bars have been added (see previous post for how I did this), I began the process of 'webbing up' the tree. The webs are strained to give a comfortable seat with a bit of give, and also provide anchor points for the girth billets. On a real saddle rivets are used to fix the webbing, but I used a glue gun instead! In the photo you can see the two central trees are saddleseat trees, and the trees at each end are dressage/VSD type trees. 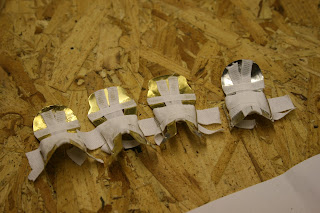 After the webbing is all secure, I cut a seat out of craft foam and glued in place. I then rasped down the edges to create a smooth appearance. The photo shows the seats part way through this process, I have done a little bit of rasping and finished them off using a knife. 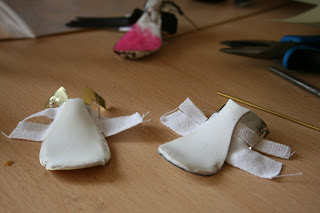 I am really happy with how these new trees are coming along. I think by sticking as closely as possible to the real process will really improve my saddles. But I think I would have struggled in the past to make these as well as I have now, partly because my skills have always been developing and evolving, and partly because I probably had to try lots of different methods before truly understanding why this one works.

Next I'll be skipping a few steps and showing you the finished saddleseat saddles. I know many people would like to see the steps in between but I can't give away all my secrets!

This is one aspect of tack making that is so hard to get right. When I first started making tack, ooh, 10 years ago at least, I used plastic coated garden wire and sellotape to make trees. They didn't have stirrup bars and were a bit flimsy. However they always had a pretty good shape and were flexible so you could bend the resultant saddle to fit lots of different models. Flexibility is something I've always tried to achieve.

Next came the sheet tin trees. I have used these for the majority of the saddles I've made. An example can be seen below on the left, which is a saddleseat tree (note the very cut back head, or fork, at the front). I would use strong tape to attach a wire under the pommel which would then form the stirrup bars. Note in the picture below the stirrup bars have not been bent into shape yet. 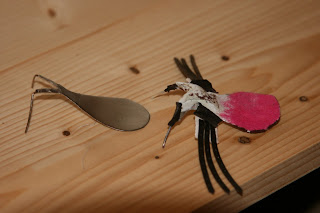 In early 2009 I was unemployed for a couple of months and so tried to sell some tack to pay for essentials. In doing so I wanted to improve my techniques. I was never very happy with the sheet tin trees, as they lacked any decent shape in the pommel and cantle areas. An obvious solution for me at the time was to sculpt a bit of form in these areas. The tree on the right in the above picture shows one of these. This one has had a seat fitted but I ripped it off as I wasn't happy with it. You can sort of see how I've built up a pommel at the front and lifted the cantle. This technique has served me well for a few years but it has some major drawbacks. Firstly it takes time to sculpt and wait for the putty to harden. It was always hard work getting a true symmetrical shape, and since the girth billets were attached before the sculpting, it was hard to keep them clean, requiring extra work and fiddling about. So last week I decided to go back to basics. I got out my 'To Handmake a Saddle' book by J. H. L. Shields. I looked at loads of pictures and videos of saddle trees, and decided to try and make a tree from scratch that looks more like the real thing. 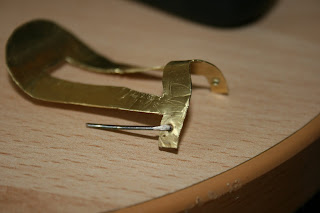 This is still a prototype, as I've already found that the bars are too low at the pommel end, and will cause me to have to make my skirts quite long. However it's a good start and I'm feeling confident that it will give me a really nicely shaped seat, that won't be flat and will have the correct concavity/convexity in all the right places. The tree has been made from brass which I had to use tin snips to cut, and a jewellers hammer and my mini anvil to get the the correct shape.

The stirrup bar shown is after several unsuccessful attempts. Firstly I tried soldering on some thin brass rod. But I suck at soldering and it just wasn't happening. This was not going along with my time saving plan! Next I tried the glue gun, but it didn't hold very well and the bars were standing proud of the surface too much and would have resulted in an ugly bump. Solution three, also the quickest, saw me punch holes into the tree, thread some 1mm silver coated wire through and hammer it closed. They are solid, and nearly flush with the tree on both sides as the silver wire is much softer.

You may want to ask why so much effort when you can buy ready-made cast english trees? Well, I've never used a cast tree, even though I have one in my stash, and although they can be modified to a certain extent, they will never be as versatile as one made from scratch. I will be developing a wide range of tree patterns in three traditional sizes and probably 4 or 5 different styles, ranging from saddleseat (see next post) to deep seated dressage trees to flat, square-cantled jumping trees.

I don't think my new brass trees will be used for all scales, probably just traditional and classic scales. The tin sheet tree will do for smaller scales just fine.

The next post will cover the development of my new saddleseat tree including making the seat.

Posted by Four Corners Tack at 5:17 PM No comments: 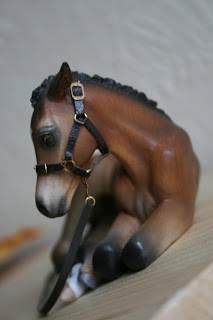 I recently made this little headcollar to fit the Little One resin, sculpted by Kelly Savage. My particular copy is called Whispered Rumours and she was painted by UK artist Jane Burn. Hopefully the headcollar will be sent out to Kelly this week along with some replacement stirrups.
Meanwhile over the last few days I've been working on some new prototypes for saddle trees. This is one aspect of miniature saddle making that in my opinion is the hardest part to get truly right. So, having never been 100% happy with any english saddle trees I've made in the past, I had a brainwave last weekend and have been busy collecting the supplies I need. So look out tomorrow for a post or two detailing my experiences.
Posted by Four Corners Tack at 6:41 PM 2 comments:

Welcome to the Four Corners Tack blog!
I'm hoping I will be able to keep this updated with all the new tack I'm making, with lots of pictures. I also have a Yahoo Group but I think a blog will be easier to share in-progress photos and also sales news.
Updates will hopefully happen at least once a week, so keep your eye on this space!
Posted by Four Corners Tack at 5:54 PM No comments: